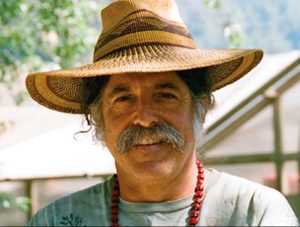 Ninth generation Californian, Amigo Bob Cantisano, 69 died of cancer on Dec 26th 2020. Many locals knew him as an eccentric, sometimes cantankerous hippy who freely espoused his encyclopedic knowledge on organic farming, pests, soils and compost to anyone who asked. But many didn’t fully comprehend his role in shaping the organic farming movement both throughout California but world-wide.

Organic food production and availability would not exist as we know if without the dogged advocacy of Amigo and his contemporaries. As his son Brook put it, he and “a handful of visionaries that saw a better way to produce and consume the food we eat. These are the people you all need to thank as you wander the aisles of Costco picking up organically labeled cans of beans, bags of non GMO corn chips and RBT-free jugs of milk. None of this awoke culture would exist if it wasn’t for the Amigos of the world tirelessly trudging through the farmlands past the KFC and McDonald’s riddled towns to sleep in his car at campgrounds or stay on friends’ couches or lonely unwelcoming hotel rooms, spending weeks at a time away from his family spreading the gospel of organic. He lived and worked the life of a traveling a rock-star with few of its hero’s accolades.”

His wife Jennifer Bliss writes in her obituary:

“Amigo Bob was a powerhouse to be reckoned with. He was a fierce advocate for the earth. He researched, utilized and taught methods of organic farming that eliminated toxic chemicals and instead focused on working with natural laws and techniques to support the healthy growth and production of food and viticulture plants.

He started on his lifelong work of providing healthy, organic foods to his community in 1972 when he helped start ‘We The People Natural Foods Cooperative’ in Truckee, CA where he met his first wife and mother of his children Kalita Todd, a powerhouse in her own right.

In 1975 he began organic farming in Yuba County and continued when he moved his young family to Nevada County where in 1976 he started Peaceful Valley Farm Supply (an afterthought when he made a minimum order of soft rock phosphate – a train car full, more than he could ever use – on the small organic farm he shared on Peaceful Valley Road, Nevada City). Where he saw a need, he led the charge to make things happen. When he learned that there were organic farmers living near one another who did not even know one another, he, along with Martin Barns, Kalita Todd and Izzy Martin gathered the organic farmers together for what would become the first EcoFarm Conference, the longest running organic farming conference on the west coast.  This year will be EcoFarm’s 41st year and will be presented in conjunction with Sierra Harvest, online January 20-23, 2021.

He Founded Organic Ag Advisors in 1987, the nation’s first organic crops advisory service which he operated until the last months of his life. He consulted with hundreds of small and large growers of fruits, vegetables, wine grapes, grains, and other crops, on the West Coast, in Arizona, Central America and Hawaii, advising both organic farmers and those making the transition from conventional farming and leading to the reduction of thousands of tons of pesticides.

He was a certified organic farm inspector, founded Aeolia Organics, organic olive company, and the Felix Gillet Institute which contributes to the historic legacy of Nevada County’s Gold Rush era.

He wrote over on hundred technical articles and bulletins, invented numerous products and techniques and was a dynamic organizer and speaker at more than 200 conferences, workshops and seminars. Without any pre-written notes, he could stand up and talk organic farming and activism and get a huge crowd inspired to go out and change the world for the better. Amigo was a deadhead and an active participant at the mythical Oregon Country Fair where he ran the Organic Matters Booth in Energy Park.

While he was disappointed that “the heart and the soul of the Organic Movement had been replaced by the bottom line”, late in life, Amigo concluded that it was good news that organics had become a major industry. “What has occurred is great, the changes have provided more consumer access to organic produce, more organic products, better soil management, stricter requirements regarding pesticide management, increasing use of biological control and soil benefiting crop rotation. I’m positive and optimistic. It’s just going to take another lifetime or two before things really completely change. I think someday we’re going to look at conventional agriculture as, “that’s how it used to be,” and we’re going to call organic farming “conventional”.

In death Amigo continues to be a pioneer. He wanted to have his body composted in the world’s first human composting facility, just opened for business on December 20, 2020: Recompose. The family is accepting donations to help cover the costs and transportation of the body arranged by Chapel of the Angels and Recompose. They are also accepting donations to the Felix Gillet Institute which works to preserve and propagate heirloom perennial trees and berries that are adapted to our area. Amigo’s wife and Adam Nuber of the Felix Gillet Institute plan to pick up the resulting cubic yard of compost, roughly 30 plus days later. Being an organic farmer, Amigo knew that compost is the foundation of all the best organic farming. It is the living, microbiology that makes minerals and nutrients most bioavailable, contributing to robust, productive and happy plants. It is only fit that he should be composted and become the living biology that will inoculate and nourish the composts, farms and gardens of others.

Amigo’s Facebook page has become a place to share tributes and memories. People all over the world are praying, chanting and lighting candles for his journey. Even the earth shook to honor this man who fought his whole life to protect her.

His influence was worldwide, but his impact on Nevada County, and on Sierra Harvest, has helped to shape our community’s approach to organic, local food, and how to respect our beautiful landscape. His work will guide us as we continue to build a resilient and regenerative food system.