Despite the fact I give presentations to parents on picky eaters, I don’t feel qualified to write about this subject because I am the mother of two adventurous and voracious eaters. My children eagerly eat Saag Paneer (Indian creamed spinach) and bowls of salad without dressing. They eat whole cucumbers like other kids eat apples. My two year old rarely takes more than three bites of cake or ice cream because he’s had enough. Recently, my four year old has been experimenting with picky eating, declaring he will only eat foods that are green. (He believes that Incredible Hulk’s supernatural strength and skin color comes from eating only green foods.)

Of course, I’d like to attribute my children’s eating habits as a direct result of my spectacular parenting abilities, but I know that that would be foolish, because there’s a host of behaviors I refuse to take credit for. There are some things that I do believe have made a significant impact on their relationship with food and eating. 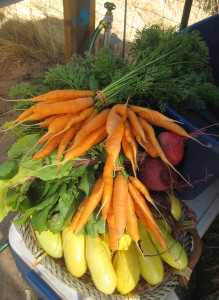 We grow food. My children can roam our yard and try apples, pears, plums and cherries. They can graze on raspberries, strawberries and blueberries. They eat ripe tomatoes, munch on fennel fronds, basil and mint, and nibble on leaves of collards, lettuce and kale. One of the things that make children more adventurous eaters is taking a role in the growing process. They are much more eager to try a new vegetable if they planted the seed, watered it, and eagerly watched plant sprout, blossom and bear fruit. Typically children want to try a bite of what magically grew from the ground.

The majority of the produce we eat is locally grown. When fruits and vegetables are picked at their peak ripeness and eaten shortly after harvested, they are more delicious. Compare eating a strawberry bought at the grocery store in February to one bought in late June at the farmers market. Children may readily eat sweet red peppers from the farmers market in the summer, but turn their noses up at their cousins bought from the store and served in the middle of winter. By eating produce from our garden or from the farmer’s market, my kids are able to taste the natural sweetness of fruits and vegetables.

One of the problems with the Standard American Diet, infused with junk food, is that hyper-sweetened foods tend to keep taste buds in an immature state. When kids become accustomed to such a diet, fruit doesn’t taste sweet and vegetables seem almost inedible. This is a modern phenomenon due to having an unnatural and unhealthy food supply.

We cook together. By the time my boys could walk, they were allowed to climb up on a step ladder and help me cook. I gave them a chopping board and a butter knife to chop soft food alongside me. When they were two years old they started using pumpkin carving knives and could cut zucchini and cucumbers. At four and a half, my older son uses a steak knife and is my sous chef (until his attention wanes). One of the things that make children more adventurous eaters is taking a role in the cooking process as they are more eager to try foods that they have prepared.

In the classes I teach, I have found that children love being able to choose what to add to their meal. Typically, children have great enthusiasm for eating when they have the opportunity to build their meal. Children love selecting toppings for pizza, burritos, fajitas, tacos, rice bowls, wraps, vegetable soup, smoothies and fruit salad.

We eat together. While it’s convenient to let my children eat alone so that I can do other things, I know that they are learning a great deal by watching how I interact with food. I know that what I do is far more important than what I say. I can tell them to eat, but if they don’t see me eating, it sends a conflicting message. When our children watch us try unfamiliar foods, it encourages them to do the same. Children need to learn how to eat well, and they need from positive role modeling.

When we create a pleasant eating atmosphere without pressuring them to eat, our children are more likely to relax and try new foods. Beware that picky eating may be a disguise for something else, such as food intolerances or allergies, sensory issues, distraction or stress. If parents are having heated conversations, the child might be too uncomfortable to eat. If kids aren’t getting the attention they want, they may realize that they get parents’ attention by not eating. If the TV is on during meals children can become overstimulated, making it harder for them to try new foods.

For the most part, I eat what my kids eat. I don’t have foods in the house that are off limits to my children. I don’t have a cookie jar. I don’t have a cupboard filled with chips and cereal. I don’t have a freezer filled with ice cream. This isn’t to say that I don’t like these things; I just eat them on special occasions. A good rule of thumb is to keep foods in your house that you want your children to eat. “If you don’t want your child to eat it, don’t bring it home,” says David Ludwig, the director of the New Balance Foundation Obesity Prevention Center at Boston Children’s Hospital and the author of Ending the Food Fight, “When it comes to food, one of the pillars of parenting is to protect the home environment. Attention to this non-coercive measure can prevent eating issues in the first place, or help defuse problems that have already developed.”

Ellyn Satter, a dietitian and eating specialist, believes that it’s our job as parents to provide wholesome food, and that it’s the children’s job to decide whether to eat and how much to eat (without threats or rewards). She believes it’s important to give children choices; choices between carrots or cucumbers, not between chips or vegetables, or between cookies and fruit. Jennifer Shu, co-author of Food Fights, states, “Let them choose the clothes they wear, not the foods they eat. Kids get so used to mac and cheese, they forget that asparagus isn’t so bad.”

I recognize that my kids are nascent eaters. I have had decades to develop the diverse pallet, while my children’s tastes are still developing. Children have twice as many taste buds as adults. They can distinguish the slightest bitterness or spiciness in vegetables. As they get older, their taste buds die off, and foods are no longer as pungent. My diet today is rather bland compared with what it was prior to having children. I rarely add garlic or ginger to foods. I don’t make savory sauces for pastas or meat. While I take my children’s preferences into consideration when preparing meals, I don’t prepare separate meals for them. There may be an adult version; for instance if we are eating rice bowls with beans, sautéed vegetables, olives, avocado, and cheese, their version will have diced tomatoes, while mine will have spicy salsa.

While some say it takes child about ten tries before they accept a new food into their eating repertoire, Ellyn Satter believes it may be closer to thirty times for some children. At my table, I request that my kids try a few bites of a new food before they decide that they don’t like it. If, one of my boys declares he doesn’t like salmon, I acknowledge him by saying I see you don’t like salmon today. I emphasize today, because I believe it will change. When we believe that our children won’t eat certain foods and start catering to this, it doesn’t allow them the opportunity to change. Likewise, when we label our child a picky eater, it becomes much harder for them to change. Like any challenge with a child, it’s better to refer to the behavior rather than affix a label on the child.

I don’t expect them eat everything on their plates. I give them realistic portions and I hope that they will try everything. One of the worst things that a parent can do to a picky eater is force them to eat something because this will pair that particular taste with the stress response. Children may then avoid eating that food because it is associated with stress.

We eat at set meal and snack times. My children are fortunate to spend their days being physically active. They run and climb and play. When they sit down to eat, they are hungry. Children who appear to be picky eaters may simply not be hungry. A child might be full from eating too many snacks or drinking too many beverages in between scheduled meal times. If young children have portable snack containers and boxes of juice, then they may not have the opportunity to actually become hungry.

Because my children are pint sized people, they often eat pint sized portions. Because they may not eat a lot, I want to make sure they are getting the most out of every bite. To ensure this, I serve nutritious and balanced snacks. I don’t serve pretzels or granola bars or chips or cookies. My kids have come to expect hearty snacks – a plate with hummus, vegetables, fruit, cheese and nuts.

Consider all of the senses. Eating is a sensory experience. We are influenced by the way foods smell, feel, look and taste. Some children can be persuaded to eat food that they like to look at. Some picky eaters have been known to change their ways if their meal is appetizing to look at or is made into interesting shapes. Others will gladly eat unfamiliar foods on a special plate. Others are influenced by their imaginations; maybe their favorite character from a book or movie likes a certain food.

Some children really are born picky eaters. All this being said there are some children who are simply more selective eaters. According to the Genetic Science Learning Center at the University of Utah, there may be a genetic component to picky eating. Taste is a combination of one’s taste buds, genetic bias, sensory perceptions, and one’s cultural and environmental experience with food. Some people are born with hypersensitive taste buds. These “supertasters” cannot tolerate bitter foods, such as cruciferous vegetables, or overly sweet foods. A picky eater might retain their taste buds longer than the average child or they might have a gene that makes them more sensitive to bitter foods. Fortunately, their sense of smell may decrease with age, making these foods more palatable for them as they enter adulthood.

In general many young children are picky eaters. Thankfully, most will outgrow this behavior by the time they are around five years of age. David Ludwig, states that “children are born with a fear of unfamiliar foods, which protects them from eating something toxic. But they’re also programmed to develop an increasingly broad set of taste preferences. If not, children would die of starvation after weaning.” Like many things related to parenting, patience really is a virtue.

Author Anaïs Alexander is a Native of Nevada County and the mother of two boys.  She works as a Nutrition Educator for the Healthy Youth Program at the Linus Pauling Institute in Corvallis, Oregon.
References

Satter, Ellyn. (2008). Secrets of Feeding a Healthy Family: How to Eat, How to Raise Good Eaters, How to Cook. Madison, WI: Kelcy Press