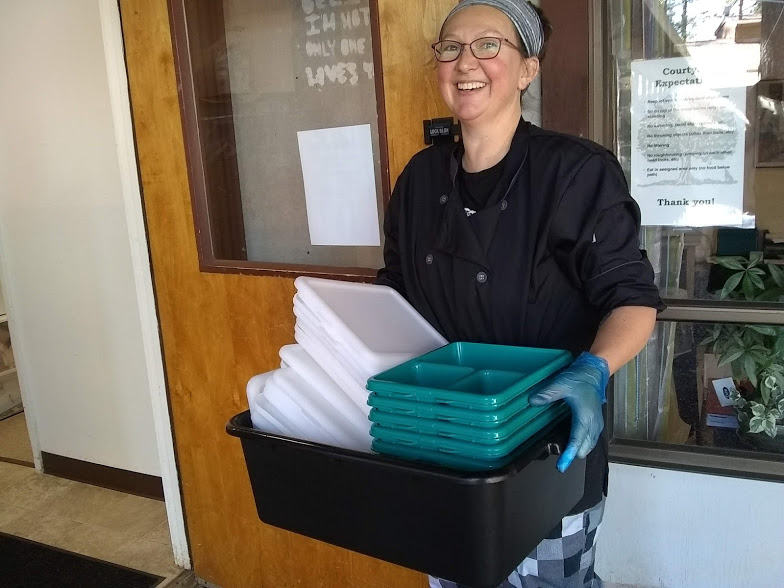 Nourish NCSA, the Nevada City School of the Art’s (NCSA) new scratch cooked school meals program kicked off this year with the motto, “Eat well, learn better.”  Dre Maher is the Food Service Coordinator who manages to feed 200 students each day of the school year with fresh, locally grown food.

While Dre was hired at NCSA last April, it took a while to get the kitchen certified and ready for the lunch program which went live this year.  She said, “Everything is from scratch everyday which is pretty unique in the school food service industry.  Every morning I do all of the cooking and then I have an assistant who comes in and helps me pack and wash everything at the end of the day.”

Maher has a lifelong love of making fresh, healthy meals and worked at a food co-op in Albuquerque, New Mexico.  In 2000, she lost a loved one to cancer.  “That had a big impact on me,” Maher said.  “I decided I wanted to be a chef but with a focus on whole food and nutrition.”  That decision took her to the Natural Gourmet Cooking Institute in New York City where she graduated before returning to Albuquerque to start a family.

There, she started her business as a caterer and as a personal chef teaching people how to shop and cook fresh meals.  Along the way she also became a farmer, learning more about how to grow her own food.  Her husband was hired to run the Briarpatch Food Co-op which brought her to Nevada County.

Maher was introduced to Sierra Harvest working as a farm to school liaison, which lead her to the role she has today.  She said she was doing tastings of fresh produce items once a month with area students and then started doing tasting days as one of the chefs.  “That was great,” Maher said.  “The kids here have known me for the past seven years as someone who is going to try to get them to try new things.”

Maher said she has relationships with a dozen local farms.  “Every carrot these kids have ever eaten here is from Super Tuber Farm.  Our food waste goes to feed pigs at Cosmic Roots Ranch where we buy our bacon, so it comes back around.”  She plans a four-week menu cycle and can change ingredients in the dish based on what is available and is at the Farmer’s Market weekly.

Sierra Harvest has built a culture of why it is important to eat fresh and teaches kids fun facts about produce and introducing them to new foods.  As the Nourish NCSA program got underway, Sierra Harvest offered Maher a tremendous amount of support in helping her find great values from local farms and helping her with proper reporting for reimbursements.

Maher said even the so called “picky eater” will try what she offers.  “Maybe it’s peer pressure or maybe it’s because they have never had it fresh before or never had it prepared a certain way before, but they will taste it a few times and usually like it.”  She said she receives a lot of “thank you’” from students and has received notes from parents saying the lunch may be the most nutritious meal their child will eat all day.

The program also ties nicely with NCSA’s curriculum, including watershed studies and trips to the Yuba River to study the salmon runs.  Maher said, “This is why it matters.  The kids will understand the connection and why we farm this way.   Hopefully, these kids will grow up and value these choices as adults.”

With a lead-in from Sierra Harvest, Nourish NCSA is making an impact on future generations, 200 kids at a time.