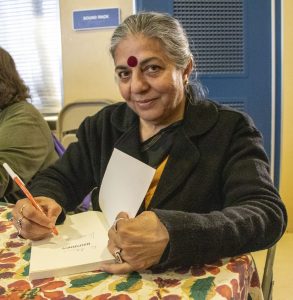 Dr. Vandana Shiva, keynote speaker at  our 2020 Sustainable Food & Farm Conference,  asked us recently to share this message with our community, and to let everyone how important this work is that we are all doing together.   We thank you for your part in building our local food economy – Sierra Harvest’s programs and the resulting transformation we see in our community would not exist without you.

We understand more poignantly than ever the importance of the resilience created by growing and preparing our own food!  We have pulled out some highlights of Dr. Shiva’s full essay below that link the destruction of nature, forests and animal habitat to the outbreak of disease globally.

One Planet, One Health – Connected through Biodiversity: From the Forests, to our Farms, to our Gut Microbiome
By Dr. Vandana Shiva

We are one Earth Family on one planet, healthy in our diversity and interconnectedness.

The planet’s health and our health is non separable.

As Dr King reminded us

“We are caught in an inescapable network of mutuality, tied in a single garment of destiny. Whatever affects one directly, affects all indirectly.”

We can be linked world-wide through the spread of disease like the corona virus when we invade the homes of other species, manipulate plants and animals for commercial profits and greed, and spread monocultures .

Or we can be connected through health and well-being for all by protecting diversity of ecosystems and protecting the biodiversity, integrity, self-organization (autopoiesis) of all living beings, including humans.

New diseases are being created because a globalized, industrialized, inefficient food and agriculture model is invading into the ecological habitat of other species and manipulating animals and plants with no respect for their integrity and their health ………

Over the past 50 years, 300 new pathogens have emerged as we destroy the habitat of species and manipulate them for profits.

According to the WHO (World Health Organization), the Ebola virus moved from wild animals to humans “The virus is transmitted to people from wild animals and spreads in the human population through human-to-human transmission.

As the New Internationalist reports,“From 2014-16, an unprecedented Ebola epidemic killed more than 11,000 people across West Africa. Now scientists have linked the outbreak to rapid deforestation.”…….

As Professor John E. Fa of Manchester Metropolitan University, a senior research associate with the Center for International Forestry Research (CIFOR). Says ‘Emerging diseases are linked to environmental alterations caused by humans. Humans are in much more contact with animals when you open up a forest… You have a balance of animals, viruses and bacteria and you alter that when you open up a forest.’

The Kyasanur Forest Disease (KFD) is a highly pathogenic virus that spread from monkeys to humans through virus infected ticks as deforestation shrunk the forest habitat of monkeys.

“The KFD virus is a pathogen that has long existed as part of an established ecosystem in South Kanara. Human modification of that ecosystem through deforestation caused the epidemic occurrence of the disease.”

The Coronavirus too has come from bats. As Sonia Shah says “When we cut down the forests that the bats live in, they don’t just go away-they come and live in the trees in our backyards and farms”.

Prof Dennis Carroll of Cornell acknowledge that as we penetrate deeper into eco-zones we did not occupy before, we create the potential for spread of infection.
http://nautil.us/issue/83/intelligence/the-man-who-saw-the-pandemic-coming

Cows were infected by the Mad Cow Disease when they were fed rendered meat of dead infected cows . When beef from infected cows was fed to humans , they were infected with the CJD. The prion is a self-infective agent, not a virus or bacteria .It illustrates that when animals are manipulated and their integrity and right to health is violated, new diseases can emerge .

Anti-biotic resistance is growing in humans because of the intensive use of chemicals in factory farms. Anti-biotic resistance markers in GMOs could also be contributing to anti biotic resistance. Horizontal gene transfer across species is a scientifically known phenomena. This is why we have Biosafety science and Biosafety regulations like the Cartagena protocol to the Convention on Biodiversity and national laws for Biosafety.

Diseases are moving from non-human animals to the human animal as we destroy the habitat and homes of wild species ,we violate the integrity of species  as we manipulate animals in factory farms and genetically manipulate plants through genetic engineering with viral promoters and anti-biotic resistance markers……….

We need to protect the Biodiversity of our forests, farms , our food to increase the biodiversity of our gut which is the true source of health. Plantations are not forests, and growing monoculture commercial plantations of trees or GMO soya is a threat to diverse species, diverse cultures and our own health .

Biodiverse organic systems need to become central to the public health solutions to the health emergency we are witnessing.

Biodiversity of the Mind must replace the monocultures of the mechanistic mind which see life’s diversity as the enemy to be exterminated.

India’s greeting “Namaste” has gone global in times of the corona virus. The significance of Namaste is not separation but a deeper unity that connects us all. Namaste means “I bow to the divine in you”. It signifies an interconnectedness that we are part of a sacred universe where everything is permeated by the divine for the benefit of all, the exclusion of none.

Let not the social isolation required in a health emergency become a permanent pattern of separation, destroying community and social cohesion.

The future depends on our oneness as humanity on one planet connected through biodiversity and health. We need each other and the earth in our rich diversity and self-organization to create resilience in times of the emergency, and to regenerate health and well-being in the post corona world

The Corona crisis creates a new opportunity to make a paradigm shift from the mechanistic, industrial age of separation, domination, greed and disease, to the age of Gaia, of a planetary civilization based on planetary consciousness that we are one earth family. That our health is One Health rooted in ecological interconnectedness, diversity, regeneration, harmony.