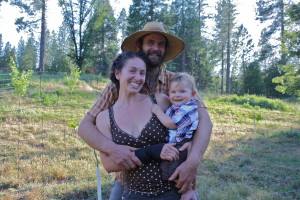 First Rain Farm has always been near and dear to Sierra Harvest’s heart – farmer Tim Van Wagner was a co-founder of Living Lands Agrarian Network, which became part of Sierra Harvest in Nov. 2013. Tim broke ground at First Rain in 2007, and was joined by his partner, Ashley Votaw, in 2013.

They have planted three of their 37 acres in vegetables, fruits, and herbs, and several more acres feed their flock of ten dairy goats. In addition to providing milk and meat, the goats also provide fertility for the fields, and help keep those blackberries in check.

You can find First Rain’s produce in all the usual venues in Nevada County (Tim has been selling to Briar Patch since 2010 and is a familiar face at the Nevada City farmer’s market). Tim’s vegetables are also tasty and reliable enough to play a starring role at three of Nevada City’s best restaurants: Ike’s, New Moon, and Three Forks Bakery and Brewery.

But they are one of only a few farms in the area to sell to The HAALo Herb Shoppe. Ashley studied herbal medicine at schools in Arcata and Sonoma: “It’s my medicine – I don’t go to the doctor and get things. I’ve relied on herbal medicine for ten years.” She loves to talk to customers about her experience when they come to pick fresh herbs at her regularly scheduled u-pick events. The herbs do more than bring in profit for the farm – they also smell good, attract pollinators, and make First Rain one of the prettiest farms in the county.

Tim learned a lot as an apprentice farmer through Living Lands, and he advises beginning farmers to do the same: “Apprentice with a semi-established farm for two or three seasons. Start small with low-risk crops and work your way up.” Ashley adds that choosing the right site for a new farm is important: “Every site has things that grow well and not so well.” They were able to creatively work around some of the issues with their site – putting tomatoes in green houses for instance.

You can learn more about First Rain, and find out when the herbal U-picks are happening at their website: firstrainfarm.com.