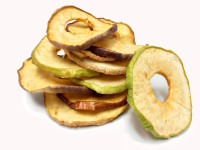 The winter is an excellent time for preserved food. With just a taste, you can be transported to a sunny summer day, or the crisp beginning of autumn.  It makes the time consuming work of preserving the bounty at its peak worth the effort.

In our world of 24/7 produce availability, it’s hard for the average person to dig into the seasonal nature of the food we eat. And how could we?  Nearly every item is on the shelf year round, and it almost always looks the same.  The cucumbers you can buy right now?  Grown in a hothouse in Mexico, or Peru.  Those apples?  Coming from Washington, picked back in September and kept in storage- that’s why they are so mealy right now.  Take that same apple, and dry it at its peak and now you’ve got a treat suitable for the shortest month of the year.

This February, 6,500 students did a taste comparison- sweet vs. tart dried apples from Bella Viva Orchards in Hughson, CA. Farming the rich soil of the Central Valley is a Martino family tradition that Bella Viva carries out with pride. They produce and sell exceptional fresh and dried fruit, nuts and chocolate to loyal customers at farmer’s markets, in select restaurants and to online customers across the country.

Named for daughters, Vivian and Belle, Bella Viva means beautiful long life in Italian. The name captures the essence of Bella Viva Orchards and their mission.  Growing the fruit that they dry and market enables them to have complete control over the fruit quality from the initial growing phase on through the final packaging and delivery.

Here are some fun facts about February’s Harvest of the Month:

Dried apples are an excellent snack (try topping them with your favorite nut butter!). Or, if you’re feeling up to something a little more complex, try this homemade granola recipe from thewholetara.com featuring dried apples.