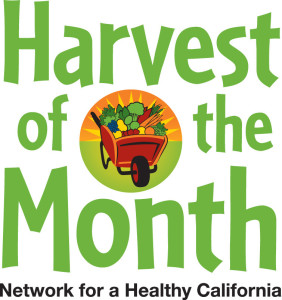 When the winter chrysanthemums go,
there’s nothing to write about
but radishes.

The humble, spicy radish- whether served alone with butter and salt, alongside a taco, pickled with sushi, or the subject of poetry – this shape shifting root is in the spot light right now as November’s Harvest of the Month!

The radish is a member of the Brassicacea or Cruciferacea family along with other vegetables such as kale, collards, broccoli, arugula, cauliflower, collards, cabbage, canola, turnips, horseradish and mustards.  Just think- all of these varied cousins descended long ago from a single wild mustard.  That’s a lot of inherent diversity!

There aren’t great archeological records of the history of radishes around the world, but there is some evidence that the center of origin for the radish is in Southeast Asia.  The first historical records of radishes come to us from Greek and Roman writings from the 3rd century B.C.  It is also thought that the radish was one of the first European crops to be brought to the Americas.  And why not?  The radish is a fast growing crop that does well germinating in cool temperatures, making it an ideal crop for spring and fall plantings.

All parts of it are edible, and there are even some varieties grown for their seed’s oil producing capabilities.  In fact, radish seeds were an important source of oil in Ancient Egypt before olive trees were introduced to the country. Certain varieties of radish are still grown for oil production today. Although not popular for human consumption (the flavor is very strong) they have potential as a bio-fuel .

Have you ever eaten a radish seedpod?  Some varieties are grown specifically for their seeds or seedpods, rather than their roots. The Rat-tailed radish, an old European variety thought to have come from East Asia centuries ago, has long, thin, curly pods which can exceed 8 in in length.  In the 17th century, the pods were often pickled and served with meat. The München Bier variety supplies spicy seed pods that are sometimes served raw as an accompaniment to beer in Germany. 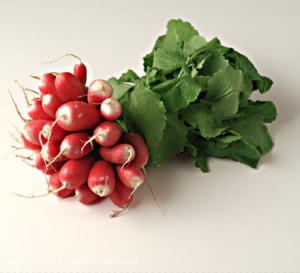 Nutritional Facts: Radishes are rich in ascorbic acid, folic acid, and potassium. They are a good source of vitamin B6, riboflavin, magnesium, copper, and calcium. One cup of sliced red radish bulbs provides approximately 19 Calories, largely from carbohydrates.

Radishes are available now at local farmer’s markets- you can add them to salads, do a quick pickle with rice wine vinegar, eat with fresh cheese or just munch them as they are.  Or, get adventurous and cook them! 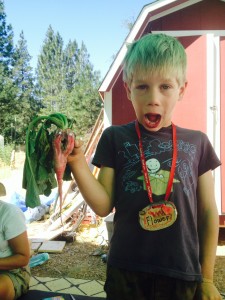 Here’s a novel recipe from foodandwine.com using the whole radish for a quick, warm side dish:

In addition to these radishes, over 2,500 local students participated in even more tastings this month, thanks to Sierra Harvest’s farm to school program.  During the first week of November, over 20 chefs went into 19 schools as part of the their annual “Tasting Week” where students taste local, seasonal produce prepared by talented local chefs who want to get kids excited about where their food comes from and how good it can taste!  Check out some of the recipes they used featuring seasonal items!

Sierra Harvest is so grateful to these local chefs who volunteered their time to educate the youth of our community!