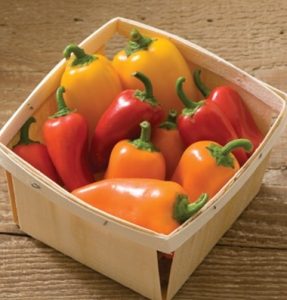 Happy National Farm to School Month!!!  Not only is October a most bountiful time of year for our local farms and farmers but it is also National Farm to School Month!  In celebration, students from 22 local elementary schools tasted sweet and flavorful ‘Lunchbox’ peppers as part of Sierra Harvest’s Farm to School program.  Farm to School provides monthly “Harvest of the Month” tastings of local, seasonal, featured produce to nearly 6,700 students in Nevada County.  But we didn’t stop there!  Both Nevada Joint Union High School District (NJUHSD) and Grass Valley School District (GVSD) featured ‘Lunchbox’ Peppers in their school lunch menus including: salad bar additions, veggies & dip, and pasta with peppers, tomatoes, and basil.  These menu items were featured as part of California Thursdays, a campaign focused on bringing more fresh, California-grown produce into our local school meals.

These tasty and sweet mini-sized pepper treats made their way from JSM Organics.  Nestled within the ocean-facing hills and moderate climate of Monterey County, JSM Organics was established in 2010.   They pledge to produce accessible and affordable organic food, to operate with integrity, provide education about their CCOF certified organic products, to respect people and the planet, and to value teamwork.  Javier Zamora, the founder of JSM Organics grew up farming in Mexico. He went to college at age 41, and then started his own farm here in California. You can find Javier’s strawberries, avocados, jicama and peppers at the BriarPatch Co-op where he delivers fresh produce each week.

So, what do we know about the pepper?  They can be sweet, spicy, large or small and are grown all over the world in temperate areas.  Nutritionally, it’s a powerhouse.

Here are some perfect pepper points to ponder:

Peppers are delicious sautéed, roasted on a sandwich, as an addition to salads and, of course, as a healthy snack.  Here’s a perfect pepper recipe just in time for the cooler days of fall.

Bell peppers, chopped tomatoes and lean ground beef are simmered in broth with onions and garlic, then topped with brown rice – everything you love about stuffed peppers, in a soup!

In a large pot or dutch oven, brown ground meat on high heat and season with salt. Drain fat if any, reduce heat to medium-low, then add peppers, onions and garlic. Cook about 5 minutes on low heat.

Add: tomatoes, tomato sauce, chicken broth, marjoram and season with salt and pepper to taste. Cover and simmer on low heat for 30 minutes. Serve about 1 1/2 cups of soup in each bowl and top with 1/2 cup cooked brown rice.  Makes about 9 1/2 cups.