The Harvest of the Month for June is zucchini! In addition to being delicious, zucchini packs a nutritious punch as a good source of vitamin C. It is also a source of manganese which helps with bone formation. Keep those bones healthy and strong this summer by enjoying zucchini- appearing at farmer’s markets starting this weekend!

Did you know zucchini is part of the same botanical family as melons? It’s true! Both belong to the Cucurbitaceae family, along with cucumbers, pumpkins, gourds, and other summer squash. Zucchini is the most common variety of summer squash, while other varieties include: pattypan squash, crookneck squash, sunburst squash, yellow squash, chayote squash, and opo squash.

Is zucchini a vegetable or fruit? Many of us would answer “vegetable” since in the culinary world squash is commonly eaten this way. But the correct answer is that zucchini is actually a fruit!

Wondering where in the world zucchini originated? The Native Americans introduced squash to European settlers as one of the “Three Sisters” – three indigenous plants used for agriculture: maize (corn), beans, and squash. While most squash varieties were brought from America to Europe, zucchini originated in Italy as a result of spontaneously occurring mutations. 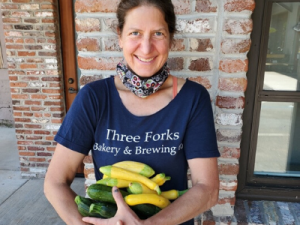 There are so many easy ways to enjoy zucchini! Add shredded zucchini to bread or muffins, saute with garlic and top with parmesan cheese, or add to your favorite salad, pasta, or even enchiladas.  What’s your favorite way to eat zucchini?  Find out how Shana Maziarz from Three Forks Bakery and Brewing Co. likes to make zucchini at the restaurant and at home!