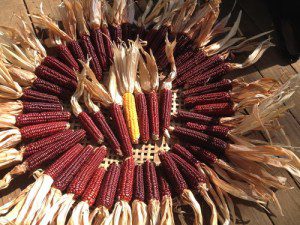 Mid-summer brings the deliciousness of fresh corn! In addition to being tasty, corn is a great source of thiamin (vitamin B1), which the body uses to produce energy in cells. Corn is also a source of fiber for healthy digestion, manganese for healthy bones, and vitamin C which boosts your immune system. Eat corn in moderation because although it can be considered a vegetable, it contains more starch and sugar than other vegetables.

Did you know corn is part of the same botanical family as rice? It’s true! Both belong to the grass family Poaceae, which also includes wheat, oats, and barley.

Wondering where in the world corn originated? Ears of corn have been found in caves in Mexico that date back seven to eight thousand years and has been grown from Southern Canada to the Andes Mountains in South America. The Native Americans gave corn to Christopher Columbus, who brought it back to Spain. Once in Europe, corn spread quickly throughout the world.  Some breeds of corn have been genetically modified and/or grown in faraway places, so we recommend buying organic corn directly from a local farmer to get the freshest taste and best nutrition. 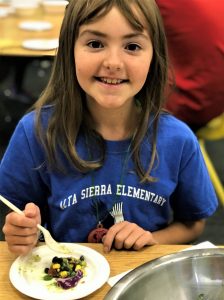 There are so many easy ways to enjoy corn! Fresh corn from the farmers’ market can be enjoyed on the cob after a very quick boil or on the grill. Add corn to your favorite salad, casserole, or soup, or sprinkle corn kernels on pizza for a new take on toppings. Stuff corn and black beans into whole wheat pita pockets for a healthy sandwich. Cut the kernels off the cob and freeze a bag for last-minute meal ideas.    Make the delicious Southwestern Bean and Corn Salad from Tasting Week, taught by local chef Renata Langis, at Alta Sierra School (see recipe below), or Summer Grilled Corn & Orzo Salad from Executive Chef Jackie Lee at Watershed at the Owl!

Salad: To make the salad, place the cooked beans and the corn kernels in a large mixing bowl. Then, add the sliced cabbage, chopped tomatoes, bell pepper, avocado, green onion and cilantro. Finally, pour desired amount of dressing, mix to incorporate, and serve.