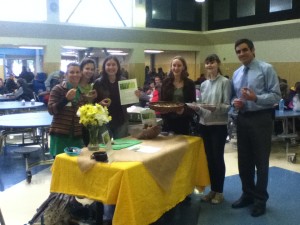 Since 2008, Sierra Harvest has been engaging kids and their families with fresh food through our Farm to School program. Seven years and 130,000 local food taste tests later, kids and their families are actually starting to ask for fresher, local food in their school meals. And Sierra Harvest is taking the next step to make this happen — farm fresh food will now show up not only on the garden stand or a HOM tasting, but in the school lunch!

After working with the Nevada Joint Union High School district last summer to get a salad bar installed in Nevada Union High school, Sierra Harvest has continued to work with the district to facilitate connections with local farmers, with promising results. Food Service Director Theresa Ruiz has agreed to purchase produce from two local farmers (Super Tuber and Sweet Roots), starting next fall. Ruiz hopes to increase the amount of local produce in her menu as participation in the school lunch program increases and more funds become available.

But do high school students even want more local, fresh food in their lunch? If members of the Good Food Crew in NU’s Eco Club have anything to say about it, they most certainly do. Sierra Harvest worked with this crew to hold a local kiwi tasting at Nevada Union High School in February. 10th grader and Eco Club member Zoe Brownwood explains: “We wanted to gauge the reactions of students to kiwis specifically, as they are a somewhat unique fruit that isn’t often served in a school cafeteria.”

Ruthanne Jahoda of Shared Abundance Organic Farm donated two cases of kiwis for the event. Brownwood describes the response: “The students’ reactions were overwhelmingly positive! People were excited about the kiwis and even some who had never tried them had a taste.” Eco club members gathered signatures for a petition requesting that kiwis be put on the menu, but unfortunately the money ran out before Ruiz was able to purchase the kiwis this year (fruit is currently the most expensive component of the school lunch).