Part of our mission at Sierra Harvest is to introduce YOU, our community, to as many local farmers as we can. This month we talked to Amie Fenwick of Boxcar Farm in Nevada City. 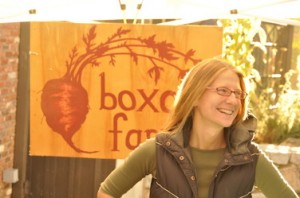 SH: How did you decide to become a farmer?

AF: I was doing social work in Philadelphia, but was feeling pent-up, being indoors under fluorescent lights and not using my body. I wanted to do something physically challenging that would make me tired at the end of the day. So, I moved to California and volunteered through WWOOF (World Wide Opportunities on Organic Farms) at Green Fire Farm in Hoopa (Humboldt County). When I got there, I found my dream farm – I stayed there all year instead of leaving for another farm a few weeks later, as I had planned. Eventually they built me a cabin and started paying me, and I returned for a second year. Grady (the farmer) has so much joy for the work.

In 2009 I was living in Nevada County with a garden that was too big for me, so I began sharing the extra food with neighbors. I was enjoying the process of building community and feeding my neighbors. By 2012, I realized that with just a bit of expansion, I could develop the project into a small farm. 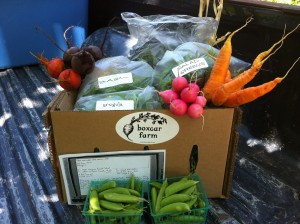 SH: Tell us about your farm.

AF: I was trying to figure out how a landless farmer who couldn’t afford to lease land could start a farming business. On my birthday, I posted to the local food coalition email list asking for what I needed, and I woke up to 50 or 60 responses. I toured all of these parcels of land around the county and found this beautiful family who was a perfect fit. They have 10 acres, and I farm a ½ acre. The business is all me – I’m the only employee. It’s a manageable size and I learn a lot each year. We have a work trade arrangement – the land owners have a full pantry of pickles and salsa. It’s a win-win for both of us.

I have grown a huge diversity of vegetables, herbs, and tropical melons, but this year I am experimenting with fewer crops – 15-20. I’ve eliminated the crops that don’t thrive, as well as the crops that I don’t particularly enjoy growing, like summer squash. I believe the crops that I love to work with can tell as much, and end up being just beautiful, and the crops that I dislike respond in kind.

AF: One of the conditions of farming this property was to live on the land, so I moved into a tiny trailer on the property, and it was like running an entire farm business out of a little box. I also loved the Boxcar Children book series as a kid. 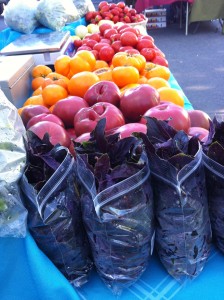 SH: How did you work with Sierra Harvest last season?

AF: I worked with Scotten School as their Farm to School partner. I grew produce for their garden stand and starts for their plant sale. I also did presentations at both Scotten and Chicago Park schools. At Chicago Park, I helped the kids clean out the garden and learn about what was growing there, amend the soil, plant seeds, and care for the plants. The kids did it completely on their own – I wanted them to see that they could do this by themselves and really make something of it. I started with the 8th graders and we figured out how they could help the littler kids who were following behind them in the garden—pulling out the biggest weeds, carrying the heaviest loads of compost.

At Scotten this past Winter we made miniature greenhouses out of old plastic bottles. They learned about why greenhouses are beneficial and how they can give plants what they need.

SH: What do you hope the kids come away with after one of your visits?

AF: I want the kids to engage with the earth. I love being a student, watching the plants, experiencing the mystery of the transition from seed to carrot on the plate. I want to share that mystery and wonder, encourage them to be curious and keep experimenting in the outdoors.

SH: What is the biggest challenge you face as a farmer?

SH: Little known fact about you?

AF: I used to be a carnie – I worked a Midway game for an old-school traveling carnival out of Florida. My co-workers were fascinating people.

SH: Anything else you want to share with our readers?

AF: I have been pretty awed by the amount of support that the community has offered. Experienced friends and farmers have been so open and helpful with sharing what works and what doesn’t. My friend calls it “Co-opetition,” since of course we’re also all trying to sell tomatoes in September.

I feel grateful that there is such a demand for fresh, seasonal, clean food in this area. People are ready to pay extra for good food– I’ve had so much interest from chefs and co-ops. It’s not like that where I grew up in rural Illinois, where a CSA is still a foreign concept.

SH: What’s next for Boxcar Farm?

AF: Watching and learning. I’m continuing to learn. I’d like to get more involved in the outreach to schools – it’s so much fun to bring kids into the farming process. I would also like to keep working with Sierra Harvest – I see Sierra Harvest as sort of the Avengers of the local food world, with everyone who has been involved in local food  in this community now working together for one organization.