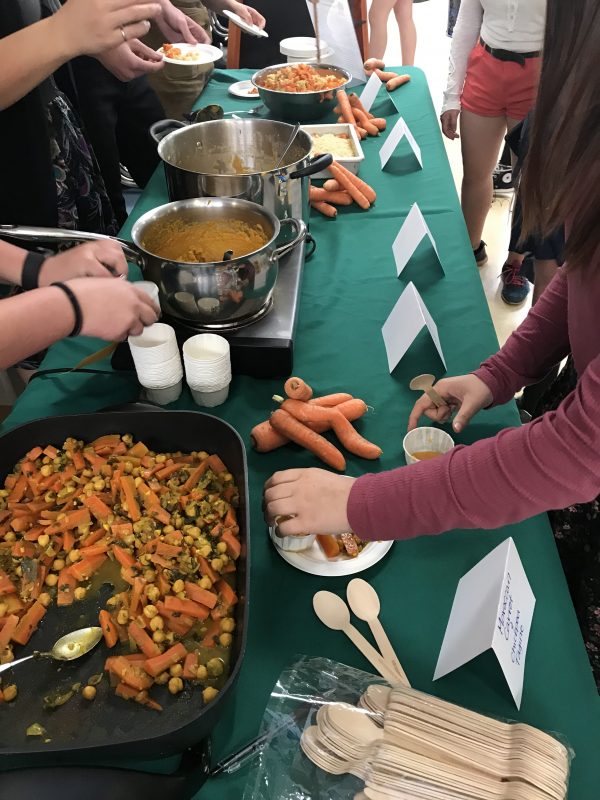 The week long competition began with a reveal of the secret ingredient: organic, local carrots from Mountain Bounty Farm. In less than an hour, student teams crafted a recipe highlighting the secret ingredient. Culinary Instructor Kelli Morris shopped for all team’s ingredients at Briar Patch with a generous gift card donated by the Food Coop. Students then had a class period to prep ingredients. When the guest judges arrived on Wednesday and Thursday, students had an hour long class period to execute and present their dishes.

Recipes were scored based on flavor, presentation, creativity, and practicality. Guest judges chose a winning dish from each of the 5 culinary classes and to compete against one another for the toughest critics: their peers. Students judged the top five dishes in the Nevada Union cafeteria during lunch last week. In a close race, Roasted Carrot and Sweet Potato soup won with 35% of the vote. Cheesy Carrot Casserole came in 2nd with 23% of the vote, followed by Carrot Ginger Soup and Moroccan Carrot Tagine.

The following is a first-hand account of the competition from guest judge Roberta DesBouillons, retired chef and former owner of Apron Strings, a cooking school for youth in San Francisco.

Once things got rolling I was aware of how industrious and ambitious these high school students were.  No one took the path of least resistance. I witnessed team work, critical thinking, time management, math, science…all the things that take place in a commercial industrial kitchen.

One by one the teams started bringing their completed projects up to the judging area.  The sense of pride and accomplishment was evident as the dishes were placed on the table to be judged. Each judge armed with fork and spoon took their job seriously. Initially the first taste was taken with discrimination as the students stood to the side looking for an indication as to how their offering did. Most dishes were nothing short of impressive, meeting the criteria set before-hand. Often the plating and garnishing was creative with great eye appeal. As the judges compared notes the dishes were rated and scores added up. In the end, they were all winners. As these high school students get closer to the day they leave the place they now call home and move into the world to create their own lives, they will have to feed themselves. Jr Iron Chef brings them a step closer to being able to take something as simple as a carrot and create a beautiful, healthy dish. It teaches them to eat fresh, locally sourced food and that spending time in the kitchen can be a rewarding experience.

If you’d like to taste the semi-finalist recipes for yourself – here they are!