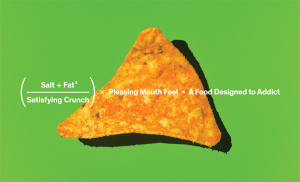 Engineering food that has a “bliss point”, is not cooking, it is a very strict science. There are technical formulas that exist with the magic amounts of sugar, salt and fat that actually make us crave more.  Michael Moss of the New York Times explores this subject with detailed interviews and notes from a monumental gathering of the heads of the biggest 11 American food companies to discuss how their products are making Americans sick and fat……..to read more click here.

On the evening of April 8, 1999, a long line of Town Cars and taxis pulled up to the Minneapolis headquarters of Pillsbury and discharged 11 men who controlled America’s largest food companies. Nestlé was in attendance, as were Kraft and Nabisco, General Mills and Procter & Gamble, Coca-Cola and Mars. Rivals any other day, the C.E.O.’s and company presidents had come together for a rare, private meeting. On the agenda was one item: the emerging obesity epidemic and how to deal with it. While the atmosphere was cordial, the men assembled were hardly friends. Their stature was defined by their skill in fighting one another for what they called “stomach share” — the amount of digestive space that any one company’s brand can grab from the competition. 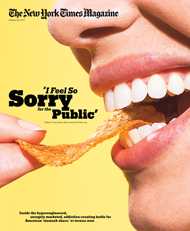 James Behnke, a 55-year-old executive at Pillsbury, greeted the men as they arrived. He was anxious but also hopeful about the plan that he and a few other food-company executives had devised to engage the C.E.O.’s on America’s growing weight problem. “We were very concerned, and rightfully so, that obesity was becoming a major issue,” Behnke recalled. “People were starting to talk about sugar taxes, and there was a lot of pressure on food companies.” Getting the company chiefs in the same room to talk about anything, much less a sensitive issue like this, was a tricky business, so Behnke and his fellow organizers had scripted the meeting carefully, honing the message to its barest essentials. “C.E.O.’s in the food industry are typically not technical guys, and they’re uncomfortable going to meetings where technical people talk in technical terms about technical things,” Behnke said. “They don’t want to be embarrassed. They don’t want to make commitments. They want to maintain their aloofness and autonomy.”

A chemist by training with a doctoral degree in food science, Behnke became Pillsbury’s chief technical officer in 1979 and was instrumental in creating a long line of hit products, including microwaveable popcorn. He deeply admired Pillsbury but in recent years had grown troubled by pictures of obese children suffering from diabetes and the earliest signs of hypertension and heart disease. In the months leading up to the C.E.O. meeting, he was engaged in conversation with a group of food-science experts who were painting an increasingly grim picture of the public’s ability to cope with the industry’s formulations — from the body’s fragile controls on overeating to the hidden power of some processed foods to make people feel hungrier still. It was time, he and a handful of others felt, to warn the C.E.O.’s that their companies may have gone too far in creating and marketing products that posed the greatest health concerns.

The discussion took place in Pillsbury’s auditorium. The first speaker was a vice president of Kraft named Michael Mudd. “I very much appreciate this opportunity to talk to you about childhood obesity and the growing challenge it presents for us all,” Mudd began. “Let me say right at the start, this is not an easy subject. There are no easy answers — for what the public health community must do to bring this problem under control or for what the industry should do as others seek to hold it accountable for what has happened. But this much is clear: For those of us who’ve looked hard at this issue, whether they’re public health professionals or staff specialists in your own companies, we feel sure that the one thing we shouldn’t do is nothing.” Read on……